Home> Adoption Of Synchronisation Provides An Additional £46.20 Per Pregnancy Per Farm.

ADOPTION OF SYNCHRONISATION PROVIDES AN ADDITIONAL £46.20 PER PREGNANCY PER FARM.


A large 1300 cow commercial beef suckler unit in South West Scotland has been using AI for several years to breed large groups of heifers and cows.  The success of the breeding programme has been variable. The farm runs a mixture of animals including Simmental, Saler and Angus cross breeds.

Traditionally the farm has used the Double Prostaglandin (PG) protocol, followed by Timed Artificial Insemination (TAI) at 72 and 96 hours, with the average yearly conception rate estimated to be around 50%.  However, the farmer was keen to understand how TAI rates could be improved and handling and AI costs reduced.

The farm worked with Solway Vets to carry out a research study in which a group of 110 heifers were synchronised with the five day CIDR co-synch protocol and compared to the herd’s standard Double PG breeding method (a system that is widely used in North America).

276 heifers were mated using protocol 1 (Double PG) and 100 heifers using protocol 2, (Five day CIDR Co-synch).  The inseminations were carried out by trained technicians and pregnancy was confirmed at between 8-9 weeks following AI, by an ultrasound examination.  The Double PG protocol resulted in a conception rate of 48% and CIDR Co-synch protocol resulted in a conception rate of 63%.The economics of the two breeding protocols are explained in the table below: 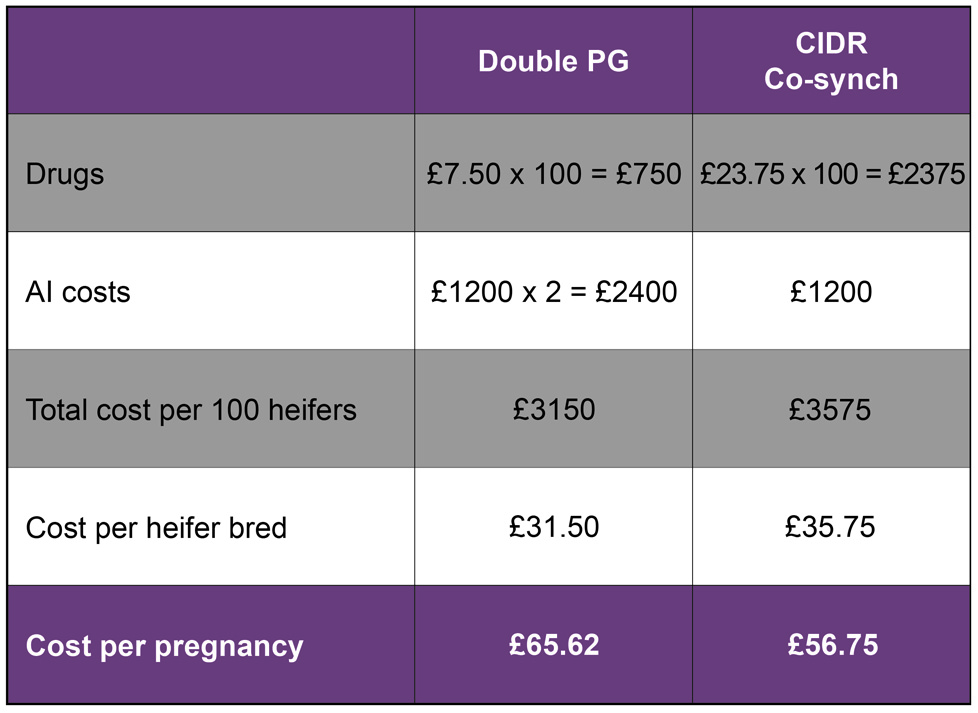 The CIDR co-synch protocol delivered a superior first service pregnancy rate, with an additional value of 15 calves/100 heifers born in the first cycle.In terms of weight and sale value, this equates to an additional 15 x 21kg weaning weight advantage, over calves born to the next cycle i.e. 315kg at £2.20/kg 315kg = £693 (assuming a 1kg daily weight gain and at least 21 days older at weaning).The study revealed that whilst the costs associated with the CIDR Co-synch protocol are greater, the superior conception rate and reduced AI costs led to an economic saving of £8.87 per pregnancy generated.  Therefore a 15% improvement in first service conception rate has the potential to be worth approximately £693 per 100 heifers bred, due to the extra kg of weaned calf weight achieved or £46.20 per pregnancy.

Commenting on the results of the study, Jocelyn Orr, Genus ABS Beef Brand Manger said: “The beef industry is still somewhat far removed from the dairy industry concerning heat detection.  Beef farmers don’t come into contact with their cows twice a day, every day to observe heats and the adoption of heat detection technology for beef herds is only in its infancy.  Undoubtedly this has made synchronisation a great option for reducing the challenges presented by heat detection.”

“Maximising the quantity of kilograms weaned and minimising the costs associated with getting an animal to weaning is arguably the prime goal for the majority of beef farmers.  We can see from the results of the case study that has been achieved, with the farm benefiting from almost £50 per pregnancy.  In addition, synchronisation also provides a great tool in helping to reduce the length of calving period,” continued Jocelyn.

“It is success stories, like this that we need to increasingly promote to help grow the use of synchronisation and I have no doubt that this will come naturally with time,” Jocelyn concluded.
←
→

Telephone number: 0870 162 2000 Email Address: cs@genusbreeding.co.uk Please get in touch and we will get your local representative to contact you

SPEAK TO ONE OF OUR SPECIALISTS

SPEAK TO ONE OF OUR SPECIALISTS

Please sign up to our newsletter for more news & information

We know how important your personal data is to you and we are committed to protecting your privacy. You can view our new Privacy Policy here by visiting www.genusplc.com.
If you should no longer wish to receive news and information from Genus ABS, you can unsubscribe at any time by emailing genusunsubscribe@genusplc.com or calling 01270 616681.